The Sentinel’s Reign has been out just over a week and a few reviews are in already. More are to follow, but I thought I’d just share a couple of comments now…

Angela – Pooled Ink – The Sentinel’s Reign breathes life into an island of magic as well as enemies thirsting for its power. Adventurous and unique this fantasy only gets more captivating with every turn.

Jennifer – A line from a book – Yummy is the word that comes to mind when I think about this book…  I loved revisiting Kalaya and as in previous books the descriptions of the world and of the magic it contains are beautiful… Even if you don’t like fantasy books usually you will like this series, so don’t delay, get your copy today!

Madam Mim – Mim Inkling – The characters are one of the most brilliant parts of this story. Every character is subtly and realistically developed throughout the course of the story, they make mistakes and have flaws and strengths, relationships, loss, responsibilities, and preferences, and as a result they feel very three-dimensional… I loved every second of The Sentinel’s Reign. It was hard to put down, and lived up to my every expectation after the first book. I would highly recommend this series for classic fantasy fans.

You can also see these reviews on Goodreads. and add it to your book shelf.

The price goes up tomorrow, so if you want it at the bargain price of 99p / 99c, please head over to Amazon.

Here’s a last look at the blurb…

The new Sentinel’s reign is doomed to failure unless Tei can prevent the Kalayan people from plunging into war.

With the new Sentinel initiated and the magic restored on Kalaya, life is flourishing for Tei and the exiles. But Rathnor’s plans for war soon escalate and thwart any chance of peace.

Brogan’s position on the Assembly is uncertain as rumours circulate that he is an exile spy.

After an attempt on his life, Farrell is more determined than ever to build a home for his people on Stone Haven. But the council have their sights set on Kalaya and Farrell struggles to steer them from war.

As trouble brews within and outside forces gather against them, can the exiles keep their hold on the magic, or will this spell the end of Kalaya and its people?

This is the second book in the Silent Sea Chronicles trilogy and follows on from The Lost Sentinel. 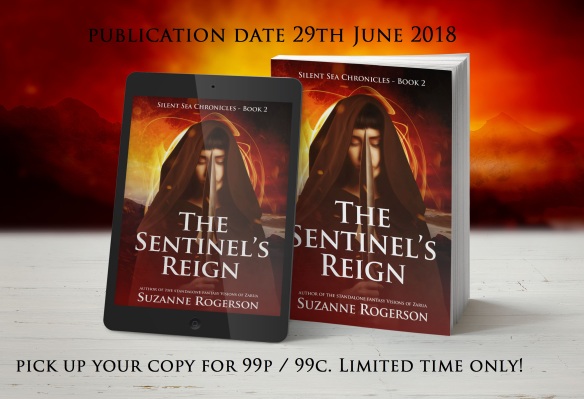