Tei has magic in a world where people like her are persecuted and forced into exile. Whilst fleeing their home, her father is attacked and his deathbed confession reveals a dangerous secret that will change her life forever.

Tei’s homeland, the magical island of Kalaya, is dying and without a Sentinel to restore the magic, it’s only a matter of time before all life is wiped out.

She must join the exiles in the search for the lost Sentinel, but they are not the only ones after the missing guardian. Sinister Masked Riders are on their trail and time is running out.

Tei must risk everything she loves to save Kalaya, but is she ready to make that sacrifice?

1396 pages of magic, adventure and intrigue.

This is a story about war, magic, and destiny, which you cannot miss. Following the characters during their journeys has been incredible… (Goodreads) Sofia – A book. A thought.

Love this series!!…The Sentinel’s Alliance is an epic conclusion to a fantastic series. (Amazon) Jessica Belmont

What an epic journey this trilogy has been…There are some terrific battle scenes, with massive shocks, and mouth dropping moments that I just hadn’t seen coming, all delivered with Rogerson perfection. (Amazon top 1000 reviewer. Vine Voice) Susan Hampson

(The Sentinel’s Alliance) This has been a fantastic finale to the trilogy, it’s had everything that made the first two books to good and then some. All of Suzanne’s brilliant world building skills are still shining through… (Goodreads) KT Robson

Rogerson has managed to craft together a fantasy trilogy that is simultaneously complex and quick. So many layers and twists are woven throughout the books and yet it never feels too heavy, the pace moves at a determined clip and action holds one’s attention captive. (Amazon) Angela – Pooled Ink Reviews 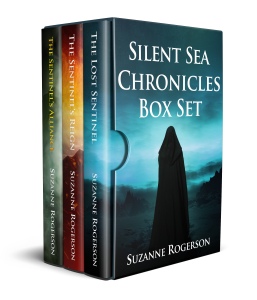