I recently spent a wonderful few days in Prague enjoying the sights, the food and the drink. But the real highlights of the trip was seeing my translated book – Zarua Ztracene Mesto (Visions of Zarua) in the bookstores and visiting my publisher, Albatros Media. I signed some books for competition prizes while I was there and found out the story behind how they discovered my book too! 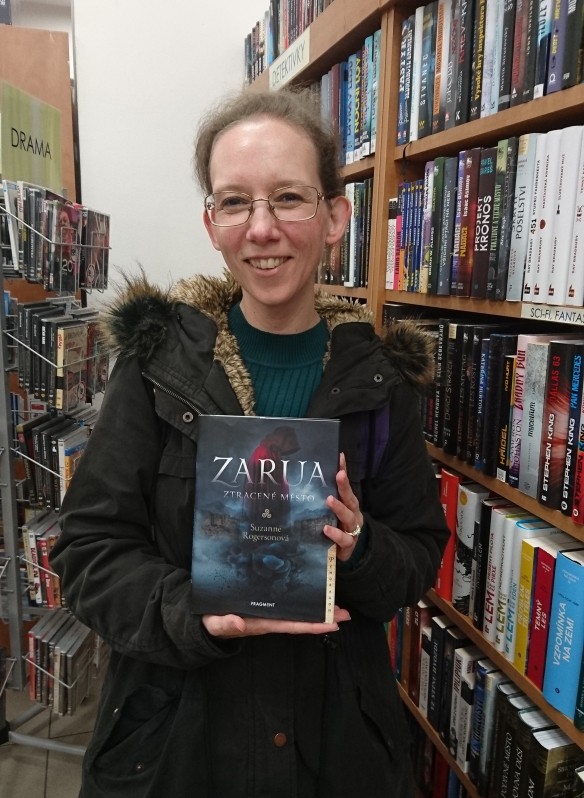 The holiday to Prague was months in planning and ran into its fair share of problems. I was supposed to go with my daughter and husband, but we didn’t have anyone to leave the puppy with so I transferred the flights to my parents and they came with me instead. We had various issues doing the transfer and I experienced a lot of frustration trying to get hold of the airline on the phone, but I finally got everything sorted a few days before we were due to fly.

The morning of the flight didn’t get off to a good start either when my alarm didn’t go off! My phone had decided to switch off and I woke up at 4.25am with only 5 minutes to get dressed and brush my teeth before the taxi arrived. We got to the airport on time, but my phone refused to switch back on and was heating up. It’s a closed unit so I had not option of removing the battery and I feared it wouldn’t be allowed on the plane. Thankfully a lovely man at the Dixon store showed me how to get it to switch on and it started to cool down almost instantly. The phone had hardly any charge left, but the pressure was off and I could finally relax and enjoy the start of my holiday. So much stress and it was still only 6.30am!

We arrived at our grand hotel and spent four days exploring the sights, having first got to grips with the transport system, which I must say is cheap and very simple to use once you understand it. The weather was beautiful and warm on the first day and we only needed a cardigan as we started our first adventure into Prague.

The remaining days the temperature dropped and we needed coats, scarves and gloves! We decided to take a bus tour through Prague, which included a walking tour of Prague Castle, a traditional lunch and a boat trip under Charles Bridge. The guide was very knowledgeable and we had a lot of fun despite the cold.

I would love to share some more pictures but I will save them for another post. I’ll end by saying that Prague is a great place to spend a few days exploring on foot or jumping on and off the many trams that run through the city. There are beautiful buildings everywhere you look, and don’t forget to look up or you’ll miss some great architecture. The eagle-eyed might also spot a few of these cute little guys in the River Vltava (Coypu).