I thought I would do a quick post on the books I bought during November’s SPFBO promo. I’m excited to add these to my Goodreads TBR, but I won’t state when I’ll read them as I still haven’t read the books I purchased during the previous sale. My TBR pile keeps growing and has reached 410. That is one of the reasons I only bought 8 books this time around, the other is I’ve spent all my money on ads. Anyway here they are… 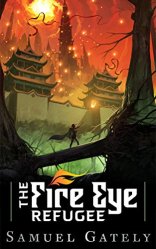 Between the Shade and the Shadow – Coleman Alexander

A Keeper’s Tale – J A Andrews

I’m really excited by this collection. I tried to be guided by the blurbs and the covers rather than be influenced by reviews or what I’ve heard through the SPFBO pages. A couple of these I’ve had my eye on for a while so I was really pleased to find them in the sale and be able to support my fellow indie authors.

I can’t promise when I’ll read them, but I will review them on my blog, Amazon and Goodreads eventually.

I think I may have sold a couple of copies of my own 2016 SPFBO entry – Visions of Zarua but with the birthday blitz and a couple of ads running at the same time, its hard to know what sparked the purchases.

What did you pick up during the sale?

Did you pick up any of the books above? Or have you already read them?