Today I’m reviewing a mystery book with a difference, it’s a YA featuring a budding young P.I. Sam Beckett. 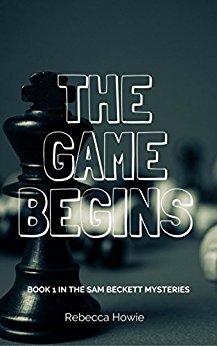 It’s been four years since the car crash took away her father and Sam Beckett’s nightmares are back with a vengeance.

When her friend suggests she take a PI course to distract herself, Sam agrees, but she soon realises it won’t be as simple as she expected when her first case leads to a woman being killed, her husband accused of her murder, and a series of threatening text messages sent to her phone which lead Sam to believe that her father’s crash might not be the accident everyone thought it was.

I’ve always loved mysteries, even going back to my childhood when I couldn’t get enough of Scooby Doo. I’ve read countless novels and watched all the shows with their alcoholic, divorced or generally messed up detectives and P.I’s. For a long time I’ve been wanting something different. The Game Begins delivers an altogether different protagonist.

Sam is young (17 and still in school), and haunted by the accident that killed her dad. She suffered memory loss after the accident but she believes there is more to it than anyone else will admit. So she takes a P.I course, deciding to find out the answers for herself.

Her first case is something so mundane that you wonder if its worth her time. Then things start to spiral out of control.

Detective Marshall turns up on the scene and I really want Sam to trust him, but she soon feels she doesn’t know who she can trust.

Shocking events lead up to even more shocking revelations and towards the end you are rooting for Sam to get to the truth and get her life back together.

I really like Sam and Marshall, and I will certainly be reading the next book, A Woman Scorned, which is due to be released in December 2017.

My rating – I have been wavering between a 4 and 4.5 stars as I really feel this is a promising start to a new P.I. series.

There were a few typos and a couple of points in the story that I thought could have been more developed, but otherwise it was an entertaining read from a young, up and coming author.

FYI – Next month Rebecca Howie joins me for a guest post during book 2’s release.

The Game Begins is on Amazon UK and Amazon US and Goodreads.