It has been two years since I published my first book, Visions of Zarua. This time two years ago I was buzzing with fear and excitement, and still in shock that I had actually released my baby into the world.

Now, with two books published and a third planned for next year, I feel more confidant as a self published author.

On the anniversary of Visions of Zarua’s Ebook publication, I’ve enjoyed reading through the reviews on Amazon and Goodreads to appreciate how well received it has been by the public. I thought I’d share the latest stats with you, before announcing my two giveaways…

Goodreads: Visions of Zarua has an average rating of 4.32 stars with 28 ratings and 16 reviews. It’s currently on the bookshelves of over 1520 people.

Amazon UK has 19 reviews and an average of 4.5 star rating.

Amazon US is a bit behind with 12 reviews and a 4.3 star ratings.

And now here’s the link to enter my Goodreads giveaway. It’s open worldwide, so why not have a go.

See the giveaway details
at Goodreads.

I’m also giving away an Ebook on my blog! All you have to do is comment on this post and I’ll pick a random winner on 24th November, the same day the paperback giveaway ends. If you’ve already read it, you can still comment and nominate a friend to receive an early Christmas present!

I’d love you to retweet and share this post with as many people as possible too, but it’s not a requirement for entry.

You can find out more about Visions of Zarua – A standalone epic fantasy, by following the links below (don’t forget it’s also available to read for free on Kindle Unlimited);

Amazon UK  and  Amazon US.

And if you have read Visions and would like to leave a review, I would love to read your thoughts. I’m still hoping to break the 20 review barrier by Christmas, so it would be great if you could help me out. 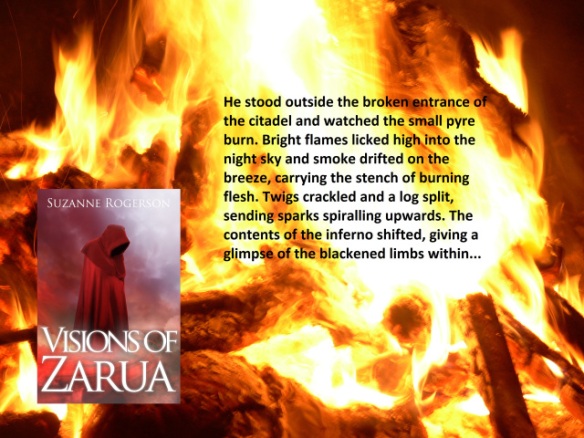