This is the second book in the Crown of Stones trilogy.  I have been looking forward to reading this ever since devouring book one last year. I wasn’t disappointed!

As with book one, the cover is fantastic. 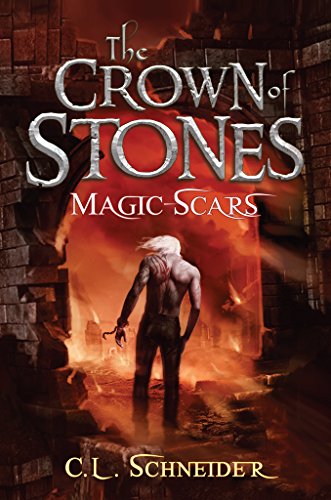 Here’s the blurb from Amazon…

Magic doesn’t wound the same as a sword.

The story of Ian Troy continues in Magic-Scars, the second installment in C. L. Schneider’s riveting epic fantasy trilogy, The Crown of Stones.

Captured by his old enemy, King Draken of Langor, Shinree magic user Ian Troy was sentenced to prison. Tortured and drugged, robbed of his will, his memories, and his magic, Ian was made to do unspeakable things. Rescued, as his body slowly rids itself of the drug, Ian realizes he has returned to an unfamiliar world gripped with fear. In the wake of his fall, those he cared for were left to their own grim fates. Draken has seized control of the realms and named himself High King. His brutal rein has sparked a desperate rebellion that Ian now finds himself a part of. His one task: recover and repair the Crown of Stones, in hopes it will tip the balance in the revolution that is brewing. In pursuit of the reason behind the artifact’s strange loss of magic, Ian is driven to release an explosion of retribution and power that leaves him irrevocably scarred.

Struggling to reconcile the man he has become with the man he once was, Ian strives to understand the growing number of magic-scars adorning his body. He searches for the truth behind his link to the Crown of Stones and uncovers shocking secrets buried for generations beneath the sand. To become the weapon the resistance needs, he must assume responsibility for his magical inheritance. But can he curb the destructive appetite that comes with it?

The price of Ian’s magic and his addiction have never been higher.

I love these books. They are filled with nonstop action, murder, blood, sex and plenty of swearing. It’s all a part of the wonderful world C.L Schneider has created.

I loved the start and how the reader is as much in the dark as the main character as to how he woke up onboard a ship. Ian has no memory of who he is or who he can trust, and his instincts tell him something is very wrong with his predicament.

In this book we learn more of the history of the Shinree and Eldrings, of the magic that Ian Troy is trying to control and the creation of the Crown of Stone. There is so much depth to the world building, but you’re never bogged down with details. It’s a compelling read right from the start.

5 stars all the way.

I recommend to fantasy lovers who aren’t afraid of a bit of graphic detail.

I’m so happy book 3 is already sitting on my kindle waiting for me.

See my review of Book 1 – Magic-price here, which was my favourite fantasy read of 2016.