No Longer Safe by A.J.Haines 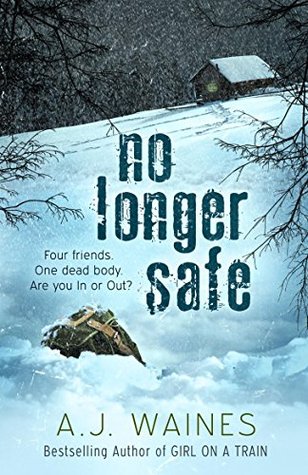 She was your best friend. Now she’s your deadliest enemy – and there’s nowhere to run…

When Alice receives an invitation from Karen, her charismatic University friend, to stay in a remote cottage in Scotland, she can’t wait to rekindle their lost friendship. But two more former students arrive – never friends of Alice’s – and as the atmosphere chills, Karen isn’t the warm-hearted soulmate Alice remembers. Barely is the reunion underway before someone is dead and the fragile gathering is pushed to breaking point.

As the snow cuts them off from civilisation and accusations fly, Alice finds herself a pawn, sinking deeper into a deadly game she can’t escape.

The book moves along at a slow pace, but I wasn’t bored at any point. The backstory is slowly revealed and as you get to know the four reunited friends, you start to understand that no one is quite as they seem. The story becomes more dramatic and events drag Alice along a path that she will have trouble coming back from.

Your suspicions are raised more during the short chapters from Karen’s perspective.  You’re left in no doubt that Alice is being deceived. But it takes a good part of the book to understand just what Karen has planned.

Did I guess the ending? Definitely not. What a shocker!

I’ve already pre-ordered the authors next book which is due out in October.

A recommended read for those who enjoy thrillers at a slightly slower pace, but it still has a dramatic end.

5 thoughts on “#Audiobook #bookreview – No Longer Safe by A. J. Haines #thriller”